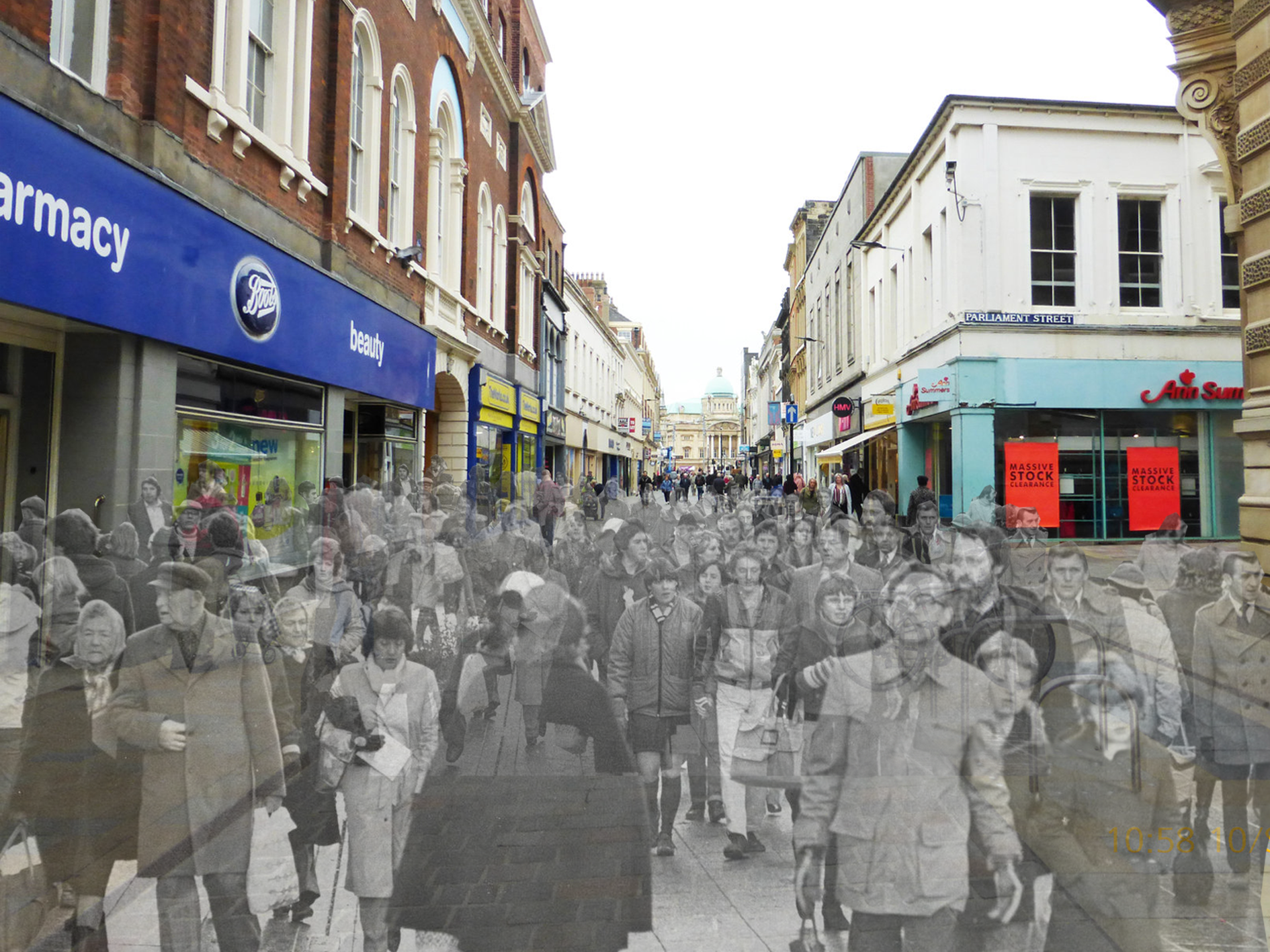 Prior to the twenty-first century, Whitefriargate was the beating heart of Hull’s city centre. Named after the Carmelite monastery that stood close to the present-day Pandora store, the street has a storied past. Just before the outbreak of the English Civil War, Charles I attempted to enter the city walls and was turned away by Sir John Hotham, the governor of Hull. The incident was one of the catalysts for the conflict that ended the system of absolute monarchy and brought Oliver Cromwell to power. Later in the eighteenth century, the street’s inns such as The Neptune Inn and the famous Olde White Harte served as departure points for the horse drawn stagecoaches that raced between Hull and York. Whitefriargate remained the main street of Hull until the late nineteenth century, when the city’s centre of gravity shifted westwards towards the train station.

Despite this, it was still a prominent destination for shoppers. In adjacent Silver Street, Hepworth’s Arcade opened in 1897, and its Victorian splendour can still be appreciated today. In the twentieth century, huge department stores such as Burtons, Marks and Spencer, and British Home Stores opened, housed in elaborate and modern art-deco buildings. During the 1960s, fishermen, dockers, and mariners from all over the world descended on Whitefriargate, which was adjacent to Prince’s Dock, to buy goods and gifts for their families. The street was closed to cars during the 1970s to create a safer environment for the pedestrians that thronged the pavement.

However, during the late ‘70s and ‘80s, large shopping centres began to open, drawing people away from traditional shops in favour of large, air-conditioned (and weatherproofed!) malls. The advent of the Internet has rendered department stores essentially obsolete, and today Whitefriargate is lined with empty shopfronts and boarded-up windows. It is no longer a destination in itself; many pedestrians now walk through without stopping to get to the old town and Trinity Market. Despite its former status, Whitefriargate has become one of the city centre’s most neglected streets.

All that can change, however, if Hull City Council can deliver on their ambitious project to regenerate the area. As part of the scheme, the “Whitefriargate Heritage Action Zone” has been launched, which aims to document and interpret the history of the street in a way that will engage the public. It will update the street environment for the twenty-first century, whilst respecting the past; restoring the historic appearance of shopfronts whilst filling empty stores with leisure opportunities, trendy food outlets, and independent shops. Ultimately, Hull City Council aims to regenerate the street in the same way that Humber Street was redeveloped during 2017’s City of Culture celebrations. The regeneration of that area has been acclaimed as a huge success and has enticed visitors, encouraging investment.

However, large redevelopment projects always require large sums of money. In October 2021 the government approved the release of £19.5 million in funds to redevelop Whitefriargate as part of their “levelling up” agenda, in order to encourage investment in the north of England. The bid followed a failed application to the government’s Future High Streets fund in January 2021. Whilst “levelling up” by reducing the disparity in investment between the north and south of England is a widely lauded goal, critics have accused the government of directing funds to areas that don’t need it, or areas that elected Tory MPs. The awarding of cash to places such as Richmond, the Chancellor’s North Yorkshire constituency, has raised eyebrows on opposition benches and given rise to accusations of cronyism.

Time will tell if Hull City Council’s initiative will succeed, but now funding has been awarded real progress looks more likely. The Labour-run council have come under fire too, for endless delays to their Albion Square redevelopment, and their lack of action over crumbling historic buildings at St. Andrew’s Dock. The millions spent on underused cycle lanes have prompted criticism and accusations that the council, led by Labour veteran Daren Hale, is out of touch. Nevertheless, adding yet another jewel to Hull’s increasingly glittering crown will give impetus to the city’s ongoing transformation into an attractive destination for tourism and business.