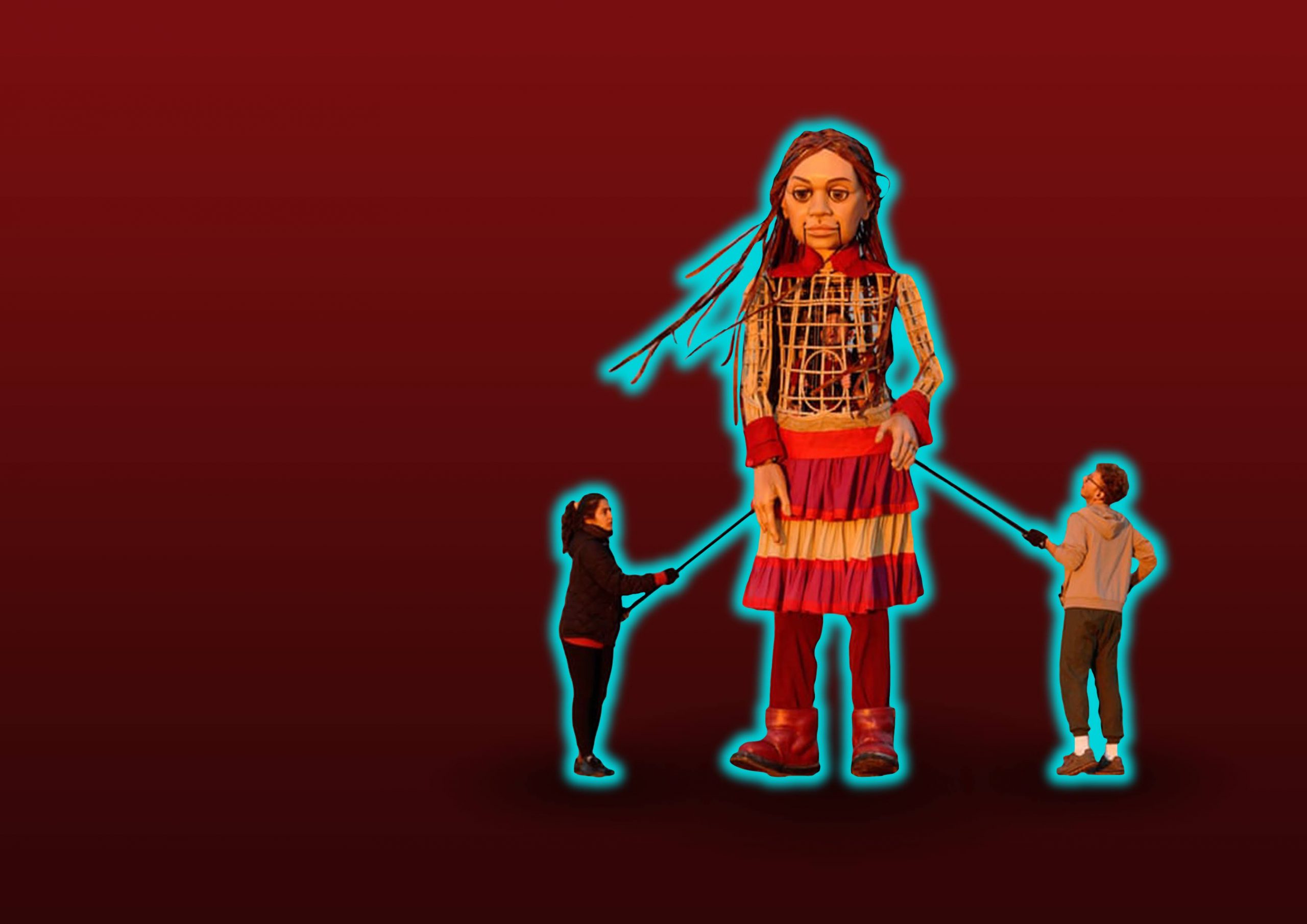 Little Amal and The Importance of Awareness

A giant puppet travelling across Europe? Surely not. Well the answer is yes and her name is ‘Little Amal’. This puppet stands 3.5 metres high and she was made by the production team ‘Handspring Puppet Company’ who previously created the puppet for the war horse theatre production. Little Amal has travelled from Gaziantep [near the Turkey-Syria border] all the way to Manchester in the United Kingdom. The puppet is an artistic representation of refugee children and the campaign is being used to spread more awareness about this consistent problem. Particularly to highlight the transient lives of refugees and the toll that it takes on them, especially the children. To be forced to flee your country is one thing, but to then risk your life in order to fully escape is something even more traumatising.

Little Amal is part of ‘The Walk’ campaign which was set up by the ‘Good Chance’ company which mainly produces charitable theatre productions, particularly in refugee camps. They were first established in 2015 when they decided to bring some entertainment to the Calais Refugee Camp through their setting up of the ‘Theatre of Hope’. This created an outlet for the refugees to express themselves, their thoughts and their feelings all of which is vital. It is important in a situation like this for refugees experiences to be both seen and heard, but also to know that there are people out there who have sympathy. It is also important that these conversations happen in order to spread awareness. Eventually ‘Good Chance’ went on to create a play called ‘The Jungle’ which was also used to spread awareness about the refugee crisis and was critically acclaimed on a global scale – demonstrating the impact that art can have on spreading understanding. ‘Little Amal’ was a feature in this play and the company decided to use her character during ‘The Walk’ to shift the focus onto child refugees.

Although refugees are not part of a specific demographic – they can be men, women, children, young or old – the stories and effects of refugee children can be some of the most harrowing. Refugees are usually fleeing their home countries because it has become a war-zone, escaping the conflict, violence and persecution in order to better their lives and the lives of the children. However, children can become especially vulnerable when they have had to experience distressing turmoil at such a young age as well as missing years of school or being forced to endure harsh conditions in refugee camps. Sometimes, children are also split from their parents, finding themselves stranded and alone in a foreign country with no idea where to go or what to do. If reading about it is destressing it is surely an arduous and emotional experience for children – who should ultimately be enjoying the simple pleasures of childhood.

Little Amal is an expression of these facts, she has been produced in order to raise awareness about the severity of the refugee crisis. Again, it so vital to ensure that people understand the situation and are made aware of it; otherwise, these refugees would be neglected and given little support. Humanitarian crises require human intervention and empathetic action but in order for that to happen the first step is to bring the situation into social consciousness. ‘The Walk’ and ‘Good Chance’s’ use of artistic expression is a brilliant way to spread this awareness. Art is often accessible to all ages and ethnicities; a visual representation holds so much power as it transgresses cultural and language barriers. Little Amal is clearly a great utilisation of resources to create a global impact.

The impact of Little Amal is what is vital, to bring forward the conversation of the refugee crisis. Little Amal’s height helps create this impact. She was made to be noticed, to be looked at and to make people see the truth however it makes them feel. Although she may seem like a simple piece of art, art is never really simple, and her message is a powerful one which needs to be recognised on a global scale. It is easy to think of the refugee crisis as something other, you see it on the news but then you force it to the back of your mind, to ignore because it makes you feel uncomfortable. But change needs to happen and there needs to be greater support for refugees. This puppet makes people aware. Think for example of a parent taking their children to see this piece of moving art; it can be admired but their children will be ultimately filled with questions. This then might force parents to explain the refugee situation and however uncomfortable that makes them they have been forced to consider the truth. If they think their children shouldn’t hear of it then surely refugee children shouldn’t be going through it? Debate and discussion are a vital aspect of change and there is no denying that Little Amal has the power to be able to instigate both of these things.

As Little Amal’s journey draws to a close this November [in Manchester] her message remains as strong as ever. This important piece of artwork and theatre has been vital to spreading awareness to the refugee crisis and has had the ability to be a powerful initiator of change. Although Little Amal’s journey is over, there are many ways to support the refugee crisis. You can go to https://www.actionaid.org.uk/ or https://www.unicef.org.uk/ or https://www.refugee-action.org.uk or https://www.savethechildren.org.uk/ there is even a charity local to the Hull area that you could get involved with https://hullhelpforrefugees.org.uk