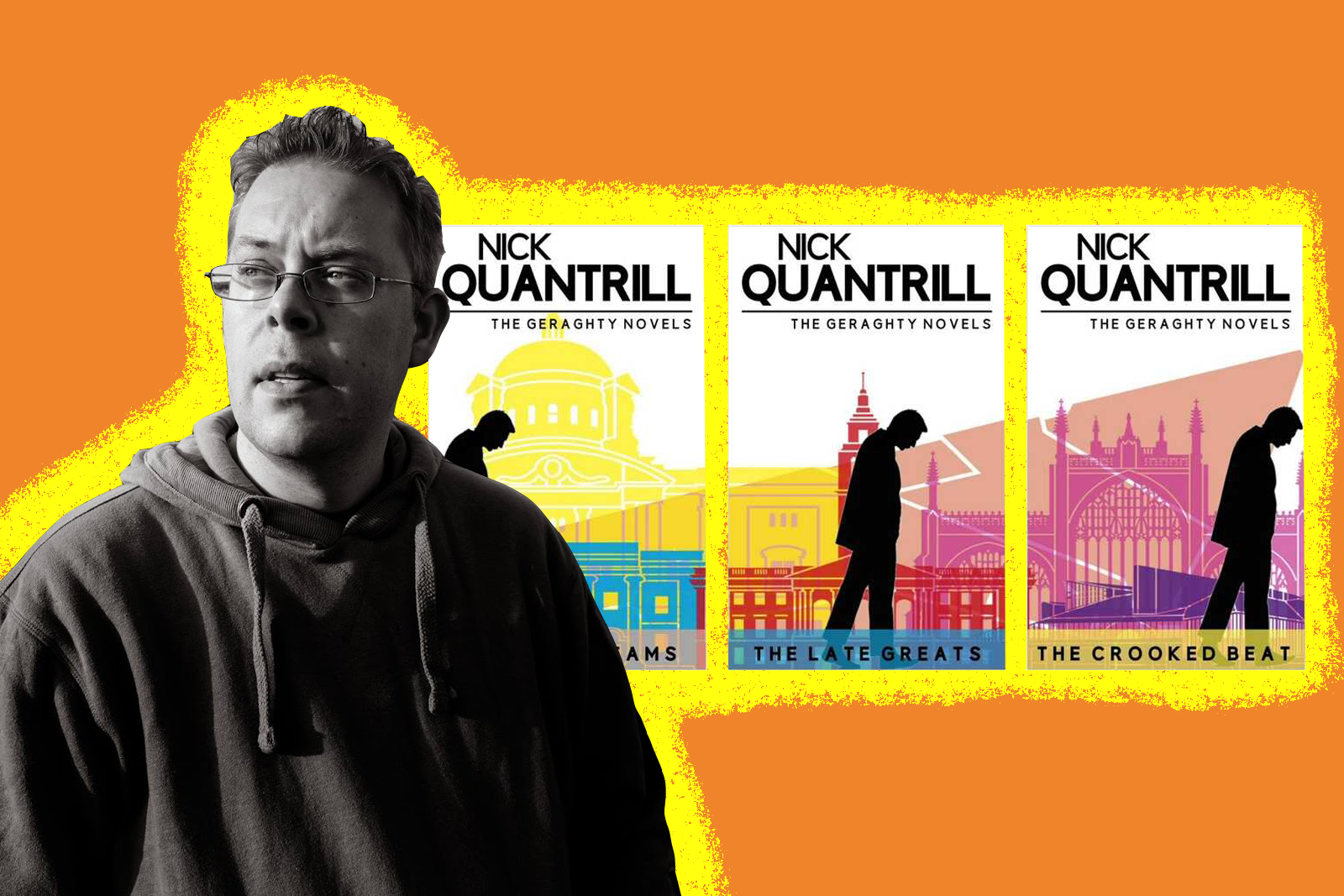 Nick Quantrill is a Hull-based crime writer with four novels under his belt, all of which feature P.I. Joe Geraghty. Here, in an exclusive interview for Hullfire, Nick chats to Pulse author Steve Rudd…

Hi Nick, how are things?

All good, thanks! I’m answering these questions as we start to emerge from lockdown, so I’m looking forward to being able to do more stuff again, but I’m very mindful that lockdown, for a man in his forties with a novel to write, isn’t the worst scenario in the world.

So, what first inspired you to start writing crime fiction?

It was a natural progression, I’d say. I’ve always been a big reader, save for a period in my teens/early twenties when I didn’t read. Looking back though, it’s always been crime. It’s almost a cliché, but like so many other crime writers, I started young with The Famous Five, and then I read Sherlock Holmes. The light-bulb moment came when I was reading Ian Rankin’s Rebus series set in Edinburgh. It’s a series that’s concerned with all the things I was studying at the time in Social Policy and Criminology via The Open University, but he presents them in a really entertaining and thought-provoking way. I started to devour crime novels, so when the idea of writing started to take hold, it was the obvious place to start.

Broken Dreams was your first novel, which introduced readers to Hull-based P.I. Joe Geraghty. What kind of writing have you done prior to having Broken Dreams published?

I’d dabbled in a few different areas, mainly non-fiction. I’d always written on and off for local magazines and online publications, mainly about music and football, but it was writing regularly for www.thisisull.com that gave me the platform, and more than anything else, the encouragement to believe I could maybe produce writing that people would want to read. I started to write short stories around that time and was fairly prolific with them for a while. Looking back, they were variable in style and would feature different protagonists, but I was really working out what I wanted to take forward; what felt like it had legs. The last one of that early batch featured an unnamed Private Investigator, who was very much a prototype Joe Geraghty.

What inspired Broken Dreams, and did you plan out the plot before you started writing, or did you wing it?

I always wanted to write about Hull. That was always the guiding principle; I just needed to find my protagonist. I wrote the bulk of that novel in 2008, in a miserable rented house, because we’d been flooded out. It was a reminder that the city was undergoing major challenges, and it had, in fact, just been named ‘UK Crap Town’ of the year. It was the start of a lot of money coming into the city for regeneration, so my intention was to use that as a backdrop and to connect big money and corruption with Joe’s personal life.

In many ways, I was learning as I went along. I didn’t know anyone who could help, and I’d never done a writing course at any level. I was feeling my way along. I had a very loose overview in my mind of how the story would play out, but I’d plan it in chunks of about 10,000 words. Since then, I’ve learned to plan more effectively, and I try not to start until I can see the full novel in front of me. It’s tough to do that, and the plan always changes, but a bit of effort at the start can save a lot of pain later on…

You’ve recently released the fourth book, Sound of the Sinners, in the Joe Geraghty series. Was it your intention to write a series from the off, and are you surprised where Joe has taken you?

I think so. I say it with a degree of hesitation, as it was never an articulated plan. Working mainly with small presses gives you a bit more freedom as a writer, but I always wanted to write about Hull. I’ve been very fortunate that the city has gone on a journey from ‘UK Crap Town’ to ‘UK City of Culture’ and beyond, giving me such a rich backdrop. Joe has always felt like the right tool to explore it through, so the challenge has been to make him interesting enough to sustain the novels.

What would you say are the most useful things that you’ve learned about the craft of writing, and the process of publishing, over the past ten years that may be of use to writers just starting out?

That’s a tough one. In terms of writing, I think I’ve retrospectively learned about structure and planning, rather than going by feel and instinct. There’s a balance to be struck, but you should never stop trying to learn. More than anything, you have to learn by making mistakes and not being afraid of failure. Like the vast majority of writers, my debut novel wasn’t my first. I’ve got a completed novel tucked away that will never be published, but I had to write it to learn how to write a novel.

In terms of publishing, it’s a world that has given me so many opportunities, but it’s also a frustrating one, as you can never control it. I think it’s absolutely key to put everything you can into writing and to enjoy the act of doing it without worrying too much about what comes after. That said, it’s never been easier to seek out good advice about the world of publishing: so many writers and industry professionals are on Twitter, sharing information all the time.

Do you find that generating ideas for plotlines gets easier the more that you write?

Generating ideas is the fun bit! Ideas are everywhere, and it’s great to pick them apart and critique them. The tricky thing is working out which idea(s) will have the legs to carry a novel. It’s perfectly possible to develop techniques to gather in these ideas. Sometimes it’s just listening to people talking; sometimes it’s a visual prompt from someone you see. I collect a lot of online links to news stories that I find interesting, and I make a lot of notes, and then I look for connections between them. There are no hard and fast rules, but I know when I land on something tangible.

You are one of the founding members of Hull Noir, an annual festival for writers and readers of crime fiction. What prompted you to start such a festival?

It started via the UK City of Culture programme. Myself, Nick Triplow and Nikki East are proud writers and readers of crime fiction, and we work in different roles within the industry. We just weren’t prepared to let the chance to showcase crime-writing during the city’s biggest year pass us by. We also made sure we had a great story to tell. It’s one thing to bring brilliant writers to the city, but there had to be more. Nick Triplow is the biographer of former Barton resident Ted Lewis (who died in 1982), probably the most important crime writer people don’t know. He wrote Jack’s Return Home, which was filmed as the groundbreaking movie, Get Carter. A big part of the festival helped to position Lewis where he deserves to be in the genre.

Did you find that moving the festival online (owing to Covid) made it easier or harder to organise, promote and run?

The actual delivery of the festival was much simpler, mainly because we contracted the digital platform delivery to an expert. It definitely simplified the process. Making the decision to go online looks obvious with hindsight, but it’s certainly hard when you’re guessing what stage the pandemic is going to be at when you’re looking to the future. That said, it did open the doors to a much wider audience.

Given that Hull and the surrounding area seems to be something of a hotbed for crime writers at present, are there any other ‘local’ writers that you’d recommend?

You’re right! It felt like it was just me a decade or so ago, but now there are so many. David Mark continues to produce top-quality crime set in the area, though he has moved away. Louise Beech straddles the genre and continues to lead the way. I would recommend Ted Lewis and his great ‘lost’ Hull-based crime novel, Plender (1971), which was recently republished by No Exit.

Do you have any plans to send Joe back out on another case in the near future for Book #5 in the Geraghty series?

Not at the moment, though Joe’s always going to be my tool for exploring the city. Maybe I’ll wait until the dust settles on the pandemic and Brexit to really get a feel for how they’ve both affected what is still a largely ignored northern city. I’m close to finishing a novel that features a young female podcaster, and that’s been more of a challenge for me as a writer. She’s desperate to get out of Hull, so that’s been a new angle for me to explore, too. We’ll see what happens!

Finally, how can people find out more about you and your writing?

My website is always a good place to start, which is www.nickquantrill.co.uk, or you can always find me—and I mean, always—on Twitter @nickquantrill