The 14th February saw students from Hull University Students’ Union take part in a nationwide protest coordinated by the UK Student Climate Network led by Isobel Hall, President of the Students’ Union. The UKSCN states that the nationwide ‘Climate Strike’ is intended to ‘protest the government’s lack of action on the Climate Crisis’. 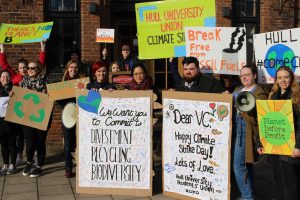 Students showed their support at the strike, as many did in the 2019 September global strike. Hull University stated, ‘as a University, we’re committed to shaping a brighter, fairer and carbon-neutral future for all and we’re incredibly proud of our students for joining the movement and using their voice to help make a difference.’ In the last three years, the university has reduced carbon emissions from 17000 tonnes to 13000 tonnes, and are committed to reducing this further, with the hope of becoming carbon neutral by 2028. The Student Union declared a climate emergency in 2019 and following this has made efforts to reduce plastic in all campus outlets.

If you would like to know more about what the Student Union is doing for environmental issues and how to get involved, join Isobel’s group Hull University Union Climate Emergency on Facebook.