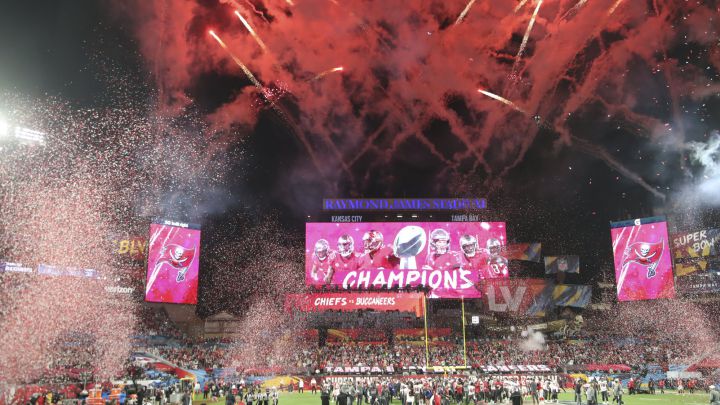 Super Bowl 55 – Brady Gets Ring Number 7 as the Chiefs Buckle Under Pressure.

On Sunday evening, one of the best quarterback matchups an NFL fan could ask for went underway at the Raymond James Stadium – a historical setting wherein the Buccaneers hosted their own Super Bowl in an NFL first. With 25,000 fans dotted in and around cardboard cut-outs, the atmosphere was electric, and the pressure was high. Coming out to their signature ‘Go Chiefs Go’ song, the Chiefs prepared to defend their title as Super Bowl champions after an impressive 14-2 regular season. The only thing standing in their way? Brady and his 6 previous Super Bowl wins out of 10 appearances.

The game kicked off with Kansas winning the coin toss and opting to kick the ball to the Buccs, who started the game with a quick turnover. 11 minutes into the quarter, Mahomes launches the ball to Tyreek Hill who fails to catch a ball in the end zone, forcing a field goal and giving the Chiefs the first points on the board. After a bit of time finding their feet and with each defensive line starting with a bang, the Buccs scored their first touchdown in the final seconds of the first quarter, with Brady passing the ball to former Patriot teammate Rob Gronkowski. The dynamic duo, who has won 3 Super Bowl’s together with New England, is back and raring to go. The first quarter ends 7-3 to Tampa.

The second quarter starts with a huge defensive set by the Chiefs, who prevent the Buccs going in from 4th and goal, but it’s not long till the ball is back with Brady and is caught again by Gronkowski in the end zone. With the score now 14-3, the Chiefs offence are being dominated by the Buccaneers again and again. The defensive tackles are making this game an up-hill battle for Mahomes who is still trying to use his legs to keep the Chiefs in the game, but with his receivers struggling with the pressure and failing to make catches, this first half has been difficult for the Chiefs offence who have only managed to score another field goal. With the ball back in hand, Brady throws to Antonio Brown from 1st and goal in the final seconds of the half, with the score finishing up 21-6. With the Chiefs having a lot of work to do during The Weekend’s half time show, they return to the changing rooms to no doubt endure a scathing review from coach Andy Reid.

Following The Weekend’s chaotic and powerful performance, the teams are back on the field. The Chiefs start the half with a decent drive, concluding again in another field goal taking their total to 9. You can sense unrest in Mahomes who is clearly frustrated by his team’s lack of discipline, calling for a total of 11 penalties in such an important game. With this in mind, the Buccaneers make no mistake to punish them for their mishaps. They are simply dominating this game and Brady is nicely complemented by the likes of Fournette, Evans and Gronkowski who are making up for what Hill and Kelce are lacking for the Chiefs. The score increases to 28-9 as Fournette runs it in from around the 30-yard line. With momentum continuing to build for Tampa Bay, they manage to sack Mahomes in his half and then force an interception thanks to the pressure the defensive line places on the passer, making him throw into 3 Buccaneers. Gaining possession once again, the Buccs go to the sticks for the first time in the game, bringing the score to 31-9 at the end of the 3rd.

Having not lost by more than one touchdown all season and having an incredible array of comebacks in their portfolio, fans and commentators continue to repeat how we should not write off the Chiefs and that this game can never be over when Mahomes is on the field. However, no more points are scored in the rest of the game and Mahomes takes hit after hit from the Buccaneers’ relentless defence. Struggling to get up each time, Mahomes is a physical embodiment of all the Chiefs hopes and dreams being squashed – it’s been a bitter end for the chiefs who have performed so well all season. In the end, it is the GOAT and now 5 time MVP Brady who manages to do it again, gaining his 7th Super Bowl victory out of 10 appearances, amounting to more Super Bowl wins than any franchise in the NFL. You really don’t see this kind of stuff every day.

Ultimately, the game came down to a lack of discipline by the Kansas defence, and a lack of completions and support from their offence. In a battle of team vs team, the Buccaneers were undoubtedly the better side. In the sport it is often that we see pundits and commentators match the two quarterbacks up, comparing their stats from the season and their playing style to determine who will come out victorious. This game, however, doesn’t seem to match up to its stats. Mahomes undoubtedly poured all he could into this game, making some insane runs and throws that were just typical Mahomes magic. Unfortunately, his team just wasn’t at the same standard. With 10 years left on his Kansas City contract, if this game tells Chiefs fans anything, it is that Mahomes is not giving up and that there is plenty left in him to make him one of the greats.

To watch the highlights of the game that took Brady to his 7th Super Bowl and the Tampa Buccaneers to their 2nd in the club’s history, click the video below: