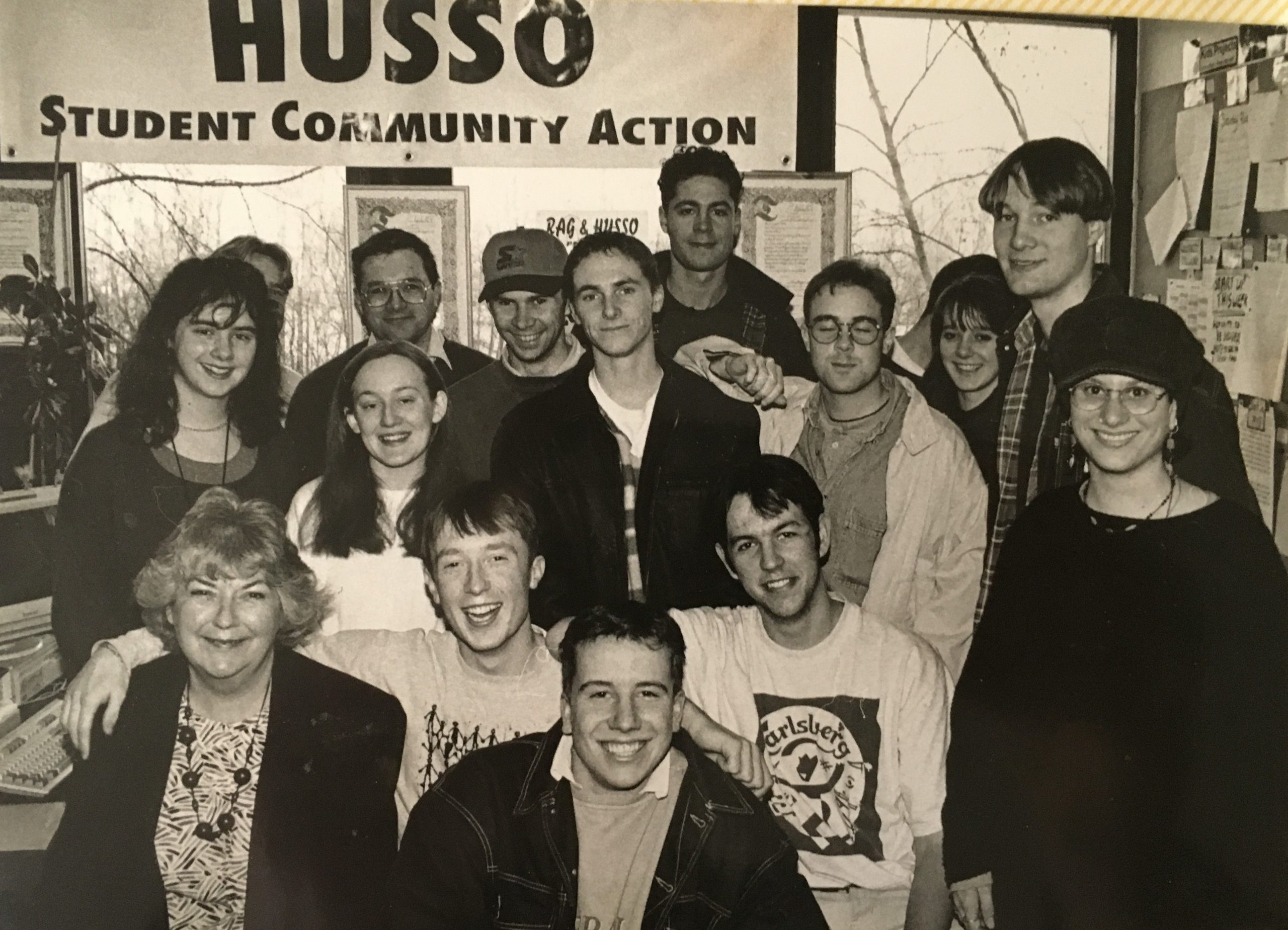 As we enter 2021, Hull University Student Union are celebrating the 60th Anniversary of HUSSO, our Student Led Volunteering Projects. HUSSO’s history is fascinating and vast! We hope to share many of our wonderful alumni stories over the course of the year to hear what inspired them to volunteer, their experiences and what impact it has had on their lives after University.

I arrived at Hull University in the Autumn of 1991 to study Social Policy and Social Work. I signed up to join HUSSO at the Freshers’ Fair after hearing the Chair, Martin Dougan, speak to all the new students. 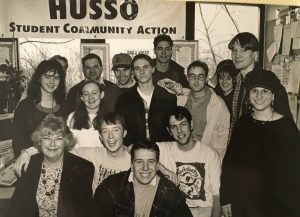 At that time HUSSO had a big profile, similar to the Athletic Union’s coordination of all the sports clubs. It had around 800 students regularly involved in 35 weekly projects.

As a fresher, I had no idea of how significant getting involved in HUSSO would prove to be. Looking back, I think it changed my life for these three reasons:

The HUSSO project I signed up for was Dock House, the base of the Hull Homeless and Rootless Project. Early Saturday evening, and often Sunday too, I would drive one of the battered HUSSO minibuses (with an incredibly wobbly gear stick) down to the docks with 4 or 5 other volunteers in varying states of nervousness.  As a 19-year-old student, it was an intimidating place to visit.

When we arrived, the manager would shout out “Stooooodents are ‘ere”.  The staff would give us the keys and leave us to run the place for 2 hours.

Our role was mainly to chat with people as they watched TV and drank soup or very sweet tea. We also had to mediate the issues, arguments and dramas which inevitably broke out.

Conversations were often started by being asked what subjects we were studying. I’ll never forget the reactions when one student replied ‘Criminology’.  It took quite a while to assure everyone that this did not mean that she wanted to become a Police officer!

Looking back, these conversations taught me a lot. As a southern, middle-class student, I learnt a huge amount about the realities of poverty and disadvantage. It also taught me about being real and not pretending to be someone I was not.

HUSSO exposed me to realities which were discomforting, and which took me out of my comfort zone.  But they influenced my thinking, and politics, far more than all the theoretical arguments on campus.

At that time HUSSO ran a wide range of projects for children, older people, and people with disabilities. It was the largest voluntary organisation in East Yorkshire

Every term, we ran big parties for over 100 older people, many of whom used wheelchairs. Ensuring they were all picked up in a fleet of begged and borrowed minibuses was a feat of logistics in itself! Probably our most complex project was the 6-week Playscheme we ran every summer for vulnerable children referred by social services.

After getting more and more involved, in my third year, I was elected HUSSO’s Chair. This was a full-time job, working alongside the other ‘sabbatical officers’ who ran the Student Union. Running HUSSO at the age of 22 was daunting, to say the least, but we had a great team in support, and it was one of the best jobs I have ever had.

One big factor was Mo Cookson who was employed by the Student Union as HUSSO’s Secretary for over 25 years.  Mo’s humour, experience and good sense helped generations of students not to panic nor take themselves too seriously! Later, along with HUSSO’s founder Derek Forster, she was honoured with an honorary degree.

Hull student Derek Forster set up the Hull University Social Services Organisation at a meeting of the Christian Union in 1961. It was a simple idea: to connect students to need in the local community. The first project was building a garden at the Blind Institute on Beverley Road.

60 years later, I read a thread on the Hull University alumni Facebook group where hundreds of former students recalled their HUSSO experiences. So many great memories were shared about children they helped with reading, older people they befriended and countless acts of practical service.

Reading these, it struck me again how much good has come about because of HUSSO in the last 60 years.  And probably the best things were not the large, high-profile events but the thousands upon thousands of largely hidden, one-to-one encounters it facilitated between students and local people.

HUSSO became one of the largest student organisations of its type in the country but even at its height, it was run on a relative shoestring with just 2 staff members and a tiny budget. It stands as a testimony of what can be achieved with vision, energy, and commitment.

From its base in the Student Union, HUSSO gave experiences which connected students to the real world. It occupied a different space to the mad-cap fundraising exploits of RAG or the issue-based politics of the Campaigns Office. HUSSO provided generations of students an opportunity to do something tangible, practical, and local in response to the injustice of poverty and disadvantage.

It is not exaggerating to say that HUSSO left an indelible mark on my life. Since leaving Hull, I have worked for the last 25 years in homeless services.  I now work as a rough sleeping adviser to the government and specialise in how faith and community groups address homelessness.

I know I speak for a lot of others when I say that HUSSO gave me far, far more than I gave to it. Alongside thousands of others, I am profoundly grateful to have been a part of such a great story which has inspired so much fantastic work over the last 60 years.

Jon Kuhrt graduated from Hull University in 1994 in Social Policy and Social Work and was Chair of HUSSO 1994/95. He writes a blog at www.gracetruth.blog

Are you one of our volunteering alumni and have a story to tell? However large or small, please contact us via this form