In the run-up to the Christmas break, approximately 80 dancers from the Hull University Dance Squad (HUDS) performed their sold-out ‘Tune In’ show at St Mary’s College. The performance consisted of a variety of TV theme tunes such as Suits, Game of Thrones, Friends and well-known adverts such as John Lewis Christmas numbers and even cat food commercials! The array of talent and style was a high class in all our ballet, tap, lyrical, commercial, street, musical theatre, and Irish, numbers! 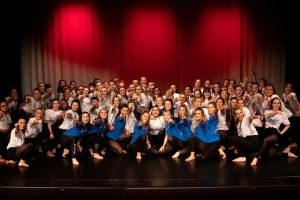 Our December show was a triumph for a lot of reasons. Not only were we able to showcase the talent that we have in Dance Squad, and the numerical growth of the club, but also our showmanship as a team. From Beginner Ballet to Advanced Street, all of the different classes rose to the occasion and were able to put on a dance spectacle to be very proud of.

Audience members commented on the sleek and professional nature of the performance which was reflected in the team spirit of all of those that took part in celebrating our achievements after the show. We were excited to highlight these in our after-show awards, which included the best newcomer, most improved, and biggest personality!

Importantly, as part of the show, the Dance Squad managed to raise over £300 for Jo’s Cervical Cancer Trust, a charity which is particularly close to the heart of HUDS.