The Athletic Union at Hull Union provides opportunities for students to participate in many different sports and is a way to relax and socialise away from the lecture theatre. The Hullfire spoke to the President of Hull University Cycling Club, Charlie Cole, about his love for cycling and why he decided to take up the sport at university. 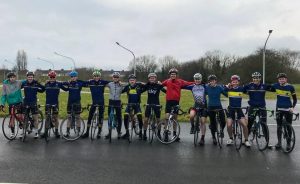 “When I began my studies, back in September 2016, it was on the back of a fantastic summer of sports, culminating with the Rio Olympic games.

“British success at these games was unprecedented, not least the medal haul achieved by British Cyclists; Laura Trott, Geraint Thomas, and Jason Kenny (becoming GB’s most successful ever Olympian) to name but a few.

“This success nationally has continued to grow – Chris Froome is now a household name and has cemented himself in Cycling history by holding all three grand tour jerseys at the same time. So, I thought to myself ‘What more could anyone need to be persuaded to get themselves on a bike and get involved?’

“National success as evidenced is seeing unprecedented success, but closer to home Yorkshire and the surrounding area has seen the passion for cycling boom. The Cycling World Championships were held here just last year, and the Tour De Yorkshire continues to draw in some of the world’s very best, year on year, even passing by just down the road in Beverly.

“The cycling club allows this passion to flourish and so much more. It is a fantastic way to get to see Hull and the surrounding area. Whether that be stopping off for Fish and Chips by the coast in Hornsea or crossing the Humber Bridge into the fantastic Lincolnshire Wolds.

“There is so much to see and do, which unfortunately many University students never get to experience, even though its right on their doorstep. In my opinion, there’s simply no better way to do it than by bike.

“This, along with keeping yourself fit, making new friends and competing against some of the countries best up and coming cyclists in BUCS, makes it one of the most exciting sports clubs on offer. As well as riding on a Wednesday afternoon and Saturday Morning, we make use of the 1km outdoor track at Ennerdale leisure center and go on regular trips to some of the best places to cycle in the country.

“If that sounds like something you could see yourself being involved in, and how could it not, check us out on Facebook at Hull University Cycling 19/20 and drop us a message. We hope to see you soon!”