In Conversation With Sea Girls 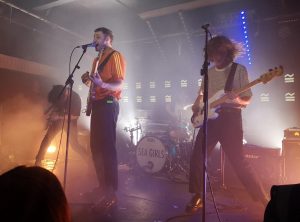 Our Emma heads out to catch up with Sea Girls

Ahead of their sold-out show, Emma caught up with Henry and Oli from Indie Rock band ‘Sea Girls’.

They may be amidst a headline tour and newly signed to the esteemed Polydor Records, but they still found time to chat festivals and Frank Sinatra from the floor of The Welly club.

So, guys, how’s the tour life been treating you so far?

Here in Hull, we’re proud of our live music venues. Of course we’ve got ‘The Welly’ and also the legendary ‘Adelphi’. What would you say is the most legendary venue you’ve ever played?

Henry: Right now, I’m going to say where we played last week: ‘The Forum’, in Kentish Town, London.
Oli: That’s a sick venue, we’ve all seen really cool bands there. I saw MGMT there, so it was really cool to be on that stage.

If absolutely anywhere was on the cards, what would be your dream venue to play?

Henry: Madison Square Gardens! It just sounds cool! The acoustics in a square venue are amazing. It just sounds classic, doesn’t it? Or the Hollywood Bowl … anything like the Gardens or the Bowl.

Has there been a moment so far that’s made you stop and think, ‘we could actually be onto something here’, with the band?

Henry: Playing shows every night is amazing. I think when we wrote ‘Call Me Out’, that was really cool. That was the first of those things where we thought, “oh sh*t, this could be something amazing” – and playing Reading and Leeds Festivals for the first time last year.

So, my favourite song you’ve released is ‘All I Want To Hear You Say’ because the lyrics are super relatable. There’s someone you fancy, you find yourself almost obsessively checking up on their social media, is there a story behind that (song)?

Henry: There is a story behind that! That’s about an ex-girlfriend of mine who’s an actress. It’s just about how I felt a year on from then and how you just want people to remember you.

You’ve played a lot of festivals over the summer including the iconic Reading and Leeds, as you mentioned earlier, but which one of the two went harder?

Henry: Reading or Leeds? I don’t think there was one.
Oli: You (Henry) got right in the front… so you know.
Henry: I know … and I don’t know, they were both absolutely crazy! I guess the year before it was Reading, sorry Leeds. We used to go to Leeds, but it was the last day and everyone’s eyes were gone, it was sad.
Oli: It was still a good show!
Henry: It was still a great show, I loved it!

Is there a band or artist you mixed with whilst playing a festival who your younger self would be like ‘wow! I can’t believe I’ve met them’?

Henry: Rory (lead guitar) went up to Johnny Borrell from ‘Razorlight’.
Oli: I don’t know if it counts, but we saw ‘Kings of Leon’ walk on stage.
Henry: We also supported ‘Foals’. Four years ago, we used to play them in our uni bedrooms, so that was amazing.

So, for those who haven’t heard your stuff before, who are your biggest influences?

Henry: I’d say, as we’re Indie Rock, I’d say ‘The Killers’. The Killers mixed with Frank Sinatra. The Killers with the soul of Frank Sinatra, but not the bad side of him, you know what I mean?
Oli: The gangster?
Henry: Not that, man.

Finally, after the tour, what’s next?

Henry: I think we’re recording.
Oli: We’re going to America in December.
Henry: Then we’re going to put out an album next year. We’re going to have a week off. I’m going to go to the beach, even though it’s really cold.